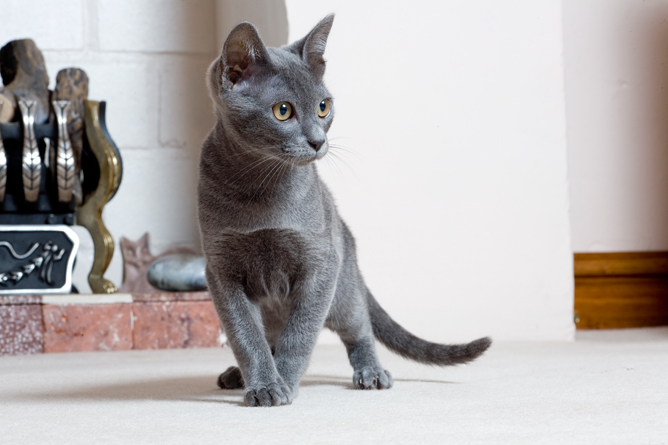 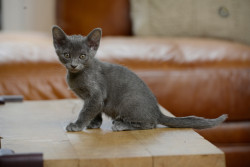 About the Korat cat breed

You only have to look into a Korat’s beautiful green eyes to fall head-over-heels, and because those stunning peepers are constantly watching you, you’ll be seeing plenty of them!

Korats have the most beautiful blue (grey) coats, often referred to as being ‘cloud coloured’. The fur can seem light and silvery in colour due to translucent tipping on each hair — the longer each tip is, the more silvery in appearance the coat is. And to top it off, just look at those beautiful green eyes — the Korat’s eyes seem to glow in their sweet little heart-shaped faces.

Their bodies are muscular, firm and semi-cobby in shape — more solid than their light, active nature suggests.

The Korat breed has over 600 years of history! Thai pictures and poems describing the breed date back to the 14th century, and suggest that the breed has hardly changed at all throughout the centuries. As their name suggests, they originate from the Korat region of Thailand and they’re also known as the Si-Sawat, which means ‘greyish blue’.

In 1959 an American ambassador was presented with a pair of Korats while on a visit to Thailand and these two were the foundation of a breeding programme in the US. Korats first arrived in Britain in 1972 and the breed was granted championship status with the Governing Council of the Cat Fancy (GCCF) in 1984. 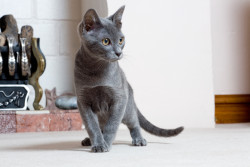 Korats require minimal grooming because their coats are so fine, so a quick brush once a week should suffice. You could also give them a wipe over with a chamois leather to give their beautiful coat a gleaming shine. Korats love to be groomed and enjoy the interaction.

Korats were the first breed to be screened for genetic diseases. They were found to suffer from two forms of a condition called Gangliosidosis, which affects the nervous system and can cause paralysis. Breeders have worked hard to eradicate the disease from their lines using DNA testing: “We are always very careful to screen our cats and are very proud that we have eliminated it,” says Jen.