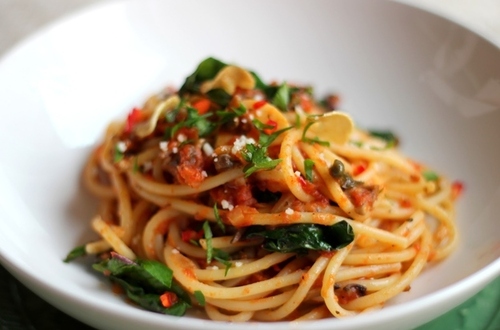 A specialty of Amatrice, near Rome, this tomato-based sauce is spiked with chilli and garlic, and richly flavoured with diced bacon and roast peppers.

1- Halve the red and green peppers, and remove the cores and seeds. Roast and peel the peppers. Cut the flesh into thin strips.
2- Heat the oil in a frying pan, add the bacon, and cook over a high heat for 5 minutes or until crisp. Add the roasted pepper strips and the chilli, and cook for 2 minutes. Stir in the garlic and cook for about 1 minute.
3- Add the tomatoes and parsley and cook for 3 minutes or until thickened. Remove from the heat and season with salt and pepper.
4- Cook the spaghetti in a large saucepan of boiling salted water according to packet instructions .
5- Drain the spaghetti thoroughly. Add the sauce and toss with the spaghetti. Serve at once, topped with Parmesan cheese shavings.