GiGi Griffin Miller is a mixed media artist, mother, and nature lover who has lived in Austin, Texas for nearly 20 years. GiGi seeks to bring happiness and beauty to the world by creating aesthetically pleasing art that is playful and feeds the imagination. She enjoys making ceramic tiles and sculpting whimsical concrete sculptures that have an uplifting effect on the audience. Her life’s goal is that everyone could experience the joy and creativity inspired by an environment similar to Disney’s theme parks, free of charge, on a daily basis. She dreams of accomplishing this goal by creating large-scale public parks and playgrounds called “Playariums” (with community involvement) that would incorporate her fantastical sculptures. Additional fuel for this passion came through learning of the therapeutic effects (both physical and emotional) of imaginative free play. GiGi’s Playarium designs include structures that would promote these types of interactions through the natural use of the artistic play areas.

Throughout her life, GiGi has spent countless hours enjoying and observing nature, which is a constant source of inspiration for her themes. From a young age, her parents’ love of travel exposed her to many interesting cultures and to fine art museums around the world. Though she has been painting since she was a young girl, she is not bound to any particular media. GiGi loves the creative process in general, whether she is painting, sculpting, working with mosaics, producing a multimedia installation, or taking photographs. At this point in her life, as a mother of young children, GiGi has decided to focus primarily on mosaic sculpture installations because it invites hands-on participation from the entire family.

GiGi received her Bachelor of Fine Arts degree from The University of Texas at Austin in 2003. Since then, GiGi has continued to develop her art skills by studying with respected artists. Beginning in 2010, GiGi spent over a year studying under famed realist painter Graydon Parrish in the classic atelier method. In 2011, GiGi completed a mosaic installation workshop with community art visionary Isaiah Zagar in the Bay Area. 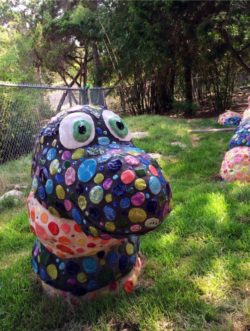 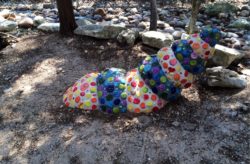 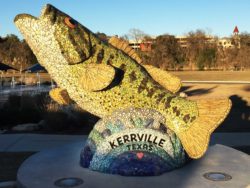 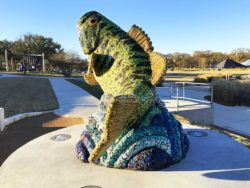