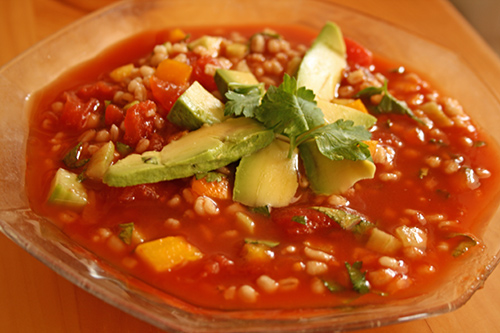 1- Coarsely chop the tomatoes, onion, peppers, and garlic. Puree in a food processor or blender with the stock, oil, and vinegar until smooth.
2- Turn the mixture into a bowl and add the lemon juice, and salt and pepper to taste. Cover and chill for at least 1 hour.
3- Serve the soup well chilled in bowls, each one garnished with spoonfuls of diced cucumber, green pepper, and garlic croutons.

PEELING TOMATOES
Cut the cores from the tomatoes and score an “x” on the base. Lmmerse the tomatoes in boiling water for 8-15 seconds until their skins start to split. Transfer at once to cold water. When the tomatoes are cool enough to handle, peel off the skin with a small knife.

GARLIC CROUTONS
Trim the crusts from slices of bread and cut into 1cm ( in) cubes. Heat a very thin film of oil in a non-stick frying pan. Peel and cubes and cook, stirring occasionally, until brown all over. Remove, and drain on paper towels.